With a long career in print and digital design, Dennis Darch has always kept his passion for fine arts. He graduated in Graphic Design by the University of Hartford, Connecticut. During his years at the university, he built his artistic pillars for the coming decades of his work.

Dennis has been fortunate of working for several iconic an globally-known companies. He started his career as graphic designer for Coach Leatherware in Nueva York. Later, he continued his professional path designing logos, team uniforms and events graphics for NFL. After five years, he was hired by a design studio where he worked with high standard clients, developing and creating style guides for the NBA, NHL, MLB and Nascar. Working for these relevant trademarks gave him a real sense of the quality expected at a high-level design.

The world around him influences his work. New York City is clearly his artistic territory. Walking by the neighborhoods where his parents grew up and see how they disappear in a sudden, a rapid decay of the beauty in many establishments from a previous time, have a strong impact on his work. His referents are historical and vintage markers as well as modern art. He is deeply influenced by artists like Basquiat, Warhol and Diebenkorn, in addition to his own professors of the University of Hartford.

His mixed media artistic technique consists of placing layers of paint and old magazine clippings, adding some more layers of silkscreen printing and sanding parts of those layers while he works on the piece, resulting in an old and modern esthetic.

His art reflects all the things he is passionate about: design, typography, engraving, vintage posters, ephemeral objects, flea markets, silk-screen printings, the city of New York and, of course, photography. His works on layers, mixing different types of techniques: from traditional painting to objects he finds, and everything presents around, which shows that unique touch in each of his art pieces.

His good eye for typography and color appear in each one of his pieces. Carefully and intentionally, he tries to find the balance between the preservation of design principles and their rupture when performing his paintings. This is the basis of each piece that he creates. Dennis agrees at first that his art is the result of many years of following corporate directions but, in the end, nobody like him needs to ‘approve’ his art. His style is his and only his.

TITLE OF THE ART WORK: THEN AND NOW – a journey from the past

Each generation has its own group of graphic spotlights. Images that reflect an evolution in creativity, inspiration and application. Many of these images come from spots of some American brands such as Kellogg’s, Nike or Mattel toys. The charm of these images, their power and simplicity have always impacted Denis Darch.

Even in his childhood, before he had a sole clue of what ‘graphic design’ meant, he was attracted to the basic graphics on wrappers: a black cat on a fireworks packet, Bazooka chewing gum, the box of coveted pro-KEDS sneakers or ‘Elsie the Cow’ on milk bottles.

These simple but unique images, and others similar to them that Denis has founds in old magazines at flea markets near his house in New Jersey, are the starting point for his art in this collection. He has taken ‘ephemeras’ from different generations to produce these ‘mixed media’ works of typography, publicity and labelling, together with other quotidian elements where he shows graphic brightness or, at least, curiosity.

Denis creates this art work by himself. He matches different creative disciplines like silk-screen, engraving and sculpture to build unique pieces that live throughout the time. This way, Denis put in practice modern techniques to make the old, new.

Definitions on this text:
Ephemeras: Instant images or icons belonging to different generations. 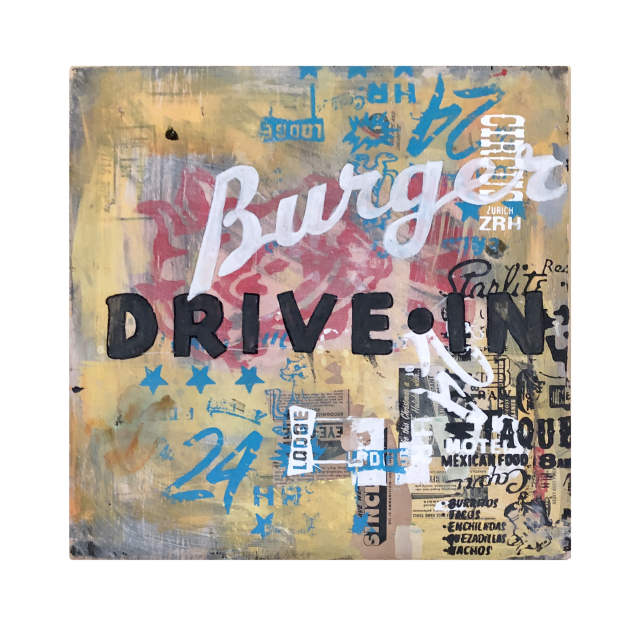 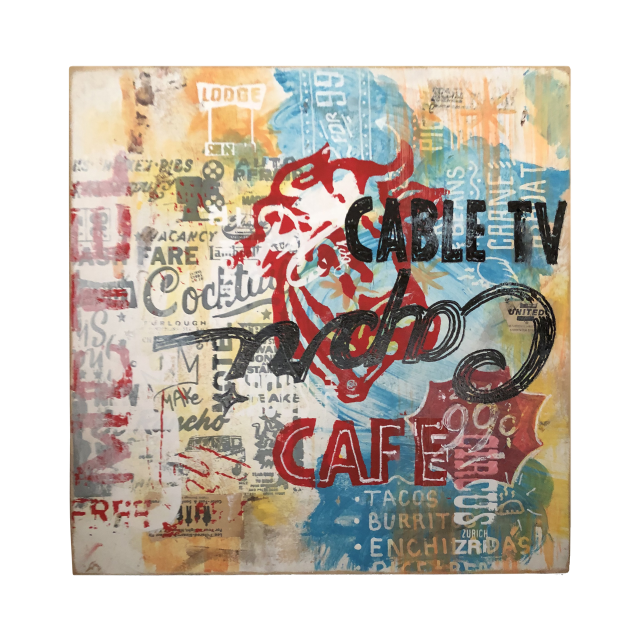 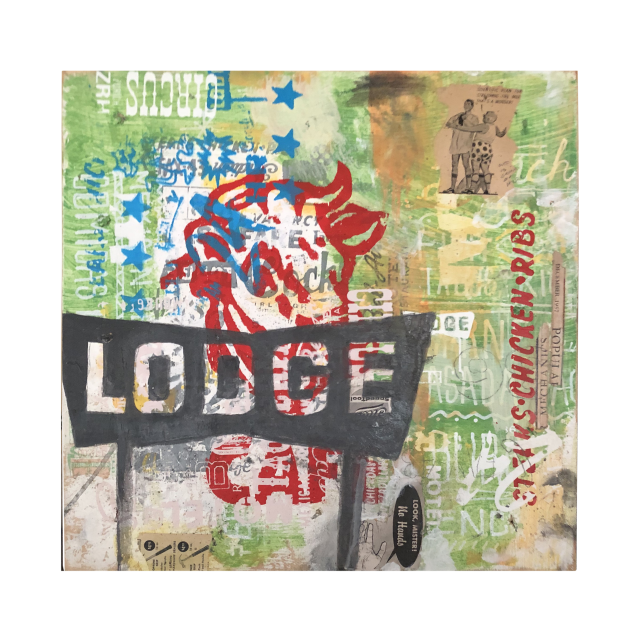 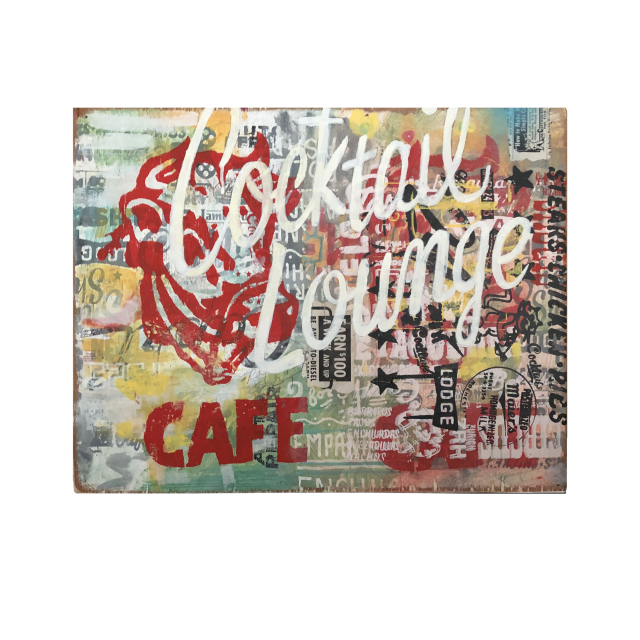 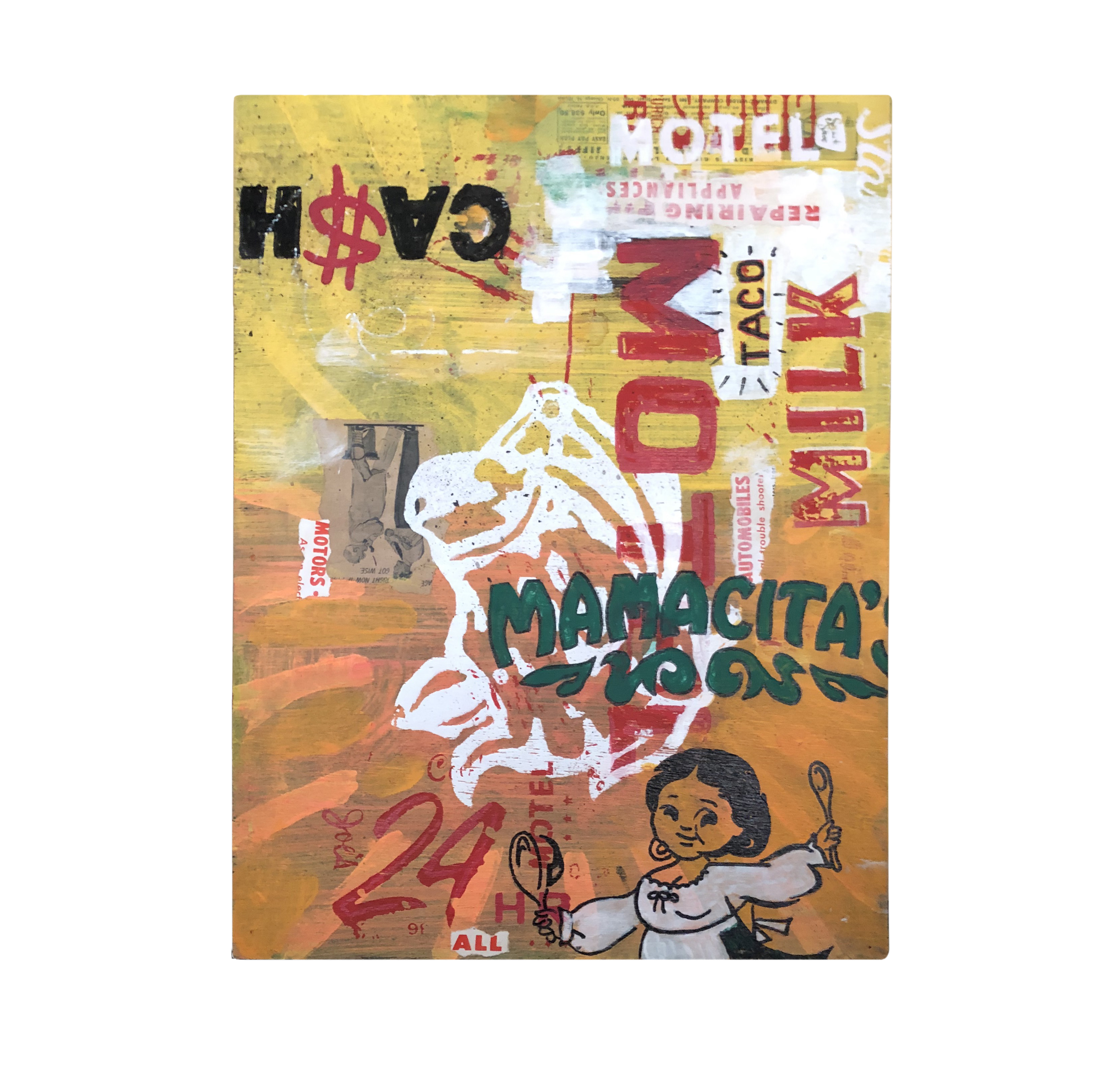 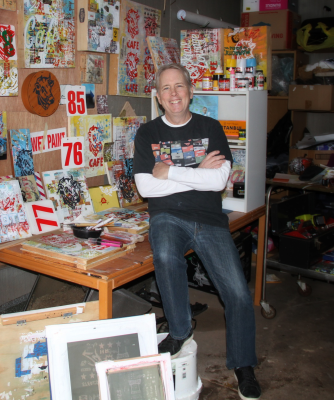